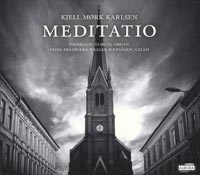 Description: Karlsen writes superbly evocative liturgical music that amply fulfils the requirements of church and concert hall. The seven movements of the Meditations illustrate important episodes in Jesus' life, which sounds as though it should be very indebted to Messiaen, but while the French composer's influence can certainly be felt, especially in the movements depicting the baptism and temptation, elsewhere the organ tradition of a previous generation - Vierne, Widor et al - is clearly evident, for instance in the exultant resurrection movement, which could be the toccata-finale of a French organ symphony. The seven meditations on passages from the book of Revelations is likewise a full-blooded, tonal work in the grand Romantic tradition, full of dramatic illustrative effects and symbolism in the interplay of textures, dissonance and consonance, static chordal material and exhilarating toccata passagework. The Biblical tragedy of Jephthah is illustrated in the programmatic cello sonata, which vividly follows the narrative in a series of dramatic episodes in an eloquent neo-romantic idiom. Inger-Lise Ulsrud (Kuhn organ of Uranienborg Church, Oslo), Frida Fredrikke Waaler Wærvågen (cello).