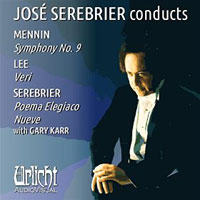 Description: Original 1960 Dharma Productions LP release). A welcome - and unexpected - first CD reissue of valuable recordings that weren't exactly common first time around on LP. Mennin's 9th Symphony is a fine entry in the canon of the American symphonic tradition. Tonal and neo-romantic, it consists of a tense, brooding and dramatic first movement, an elegiac slow movement and a vigorously propulsive finale. Serebrier's Poema is a reworking of a movement from his Partita, originally entitled Funeral March. Similar to the Mennin in its tonal and chromatic language, it begins with an elegiac introduction, after which the harsh, pagan procession proper crashes in, stormy and imposing, finally giving way to a resigned, tranquil ending. His 1969 double bass concerto was originally an extravagant multimedia project, and even without the visuals it is very much a product of the psychedelic sixties. The long, florid solo line - which takes center stage almost throughout - could belong to a relatively conventional 20th century concerto; much of the rest of what happens seems to imply the desirability of the ingestion of 'interesting substances' to make their best effect. Lee was a jazz pianist and pioneer of the inclusion of jazz into musical higher education, but Veri, its five movements bearing titles that bear on cosmological and existential issues, is almost entirely not a jazz piece aside from a couple of big-band-like passages, but is mostly a neo-romantic suite in a rather Bartókian, tonal vocabulary. A few isolated episodes of unconventional timbral effects try to make the otherwise conventional, but satisfying, piece sound more adventurous than it is. José Serebrier (conductor).