JAMES MACMILLAN (b.1959): Since it was the Day of Preparation. 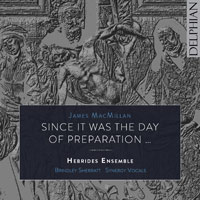 Description: Having set the Passion story twice, MacMillan then joined the relatively small group of composers who turned their attention to the narrative of the Resurrection. This is an unusual, and compelling, work in the composer's output, quite unlike his large-scale symphonic and choral works; more intimate in scale, more eclectic in idiom, though retaining many of the trademarks of MacMillan's original voice. It is scored for an unusual combination of instruments - including a theorbo! - and an ensemble of four solo voices, with a solo bass taking the rôle of Christ. Different parts of the narrative are presented in different styles, apparently chosen to reflect the mood and import of the events portrayed. These range from vocal lines derived from plainchant, solo cadenzas for the various instruments drawing on folk musics, neoclassicism or spiky modernism, renaissance and baroque polyphony, and in the most densely accompanied passages something akin to MacMillan's large-scale neo-romantic idiom. Far from resulting in a stylistic grab-bag, the effect is to pay homage to centuries of liturgical music and to present a vividly illustrated account, like viewing a gallery of paintings from Mediæval to modern times, illustrating aspects of the Resurrection. Texts included. Brindley Sherratt (bass), Synergy Vocals, Hebrides Ensemble; William Conway.