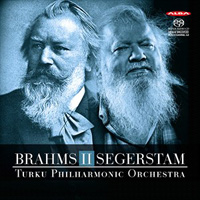 Description: Segerstam's "free-pulsative" symphonies - orchestral collages assembled from precisely notated gestures with a degree of freedom in co-ordination between blocks of material, re-synchronised at key inflection points, and intended to play for approximately the duration of Sibelius' 7th Symphony - are all very different, their roiling mass of collective creativity containing a myriad ideas vying for their place in the future of music. Segerstam has in fact, with his characteristic mixture of inspired lateral thinking and zany humor, described his symphonies as "like sperm. There is strength in numbers. Some will survive to take evolution forward". The composer's fertile propagation of the genetic material of music as he wants it to be - an amalgam of the great Romantics and the Nordic symphonists (the fons et origo of whom is, of course, Sibelius, and among whose company Segerstam belongs) - has so far led to over 300 symphonies, based on autobiographical details, places, people, events or references to other pieces in his vast repertoire as conductor. This one is "When a Cat Visited"; it seems reasonable to surmise that the cat visited at night, as the early part of the piece has a nocturnal character, less demonstrative than the arresting openings of many of Segerstam's symphonies, and it recedes into darkness at the end. You hear the cat, meowing and hissing, and purring at the end; the concertmaster has an important rôle to play in this piece. Otherwise the overall formula is familiar; the orchestra is anchored by two antiphonally placed pianos and the work has an arch shape with strong tonal referents emerging from the tumult at climactic points. Turku Philharmonic Orchestra; Leif Segerstam.