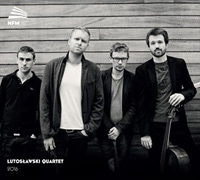 Description: These three very recent works - all from last year - are closely associated with this ensemble. Markowicz, the quartet's 2nd violin, considers his breadth of knowledge of the quartet repertory as a performer an asset as composer, and his style draws on both techniques throughout the centuries and specific masterworks of the genre. Gestures and themes by Lutosławski, Bacewicz and Szymanowski are blended into a kind of summary of 10 years of playing in this ensemble. One movement is a strongly rhythmic scherzo based on a rhythm by Mykietyn, and the finale is a frantic rondo, described by the composer (at least in translation) as "bonkers". Kwieciński's piece is humorous and theatrical, based on, of all things, the gameplay scenario of the formerly immensely popular video game "Super Mario Brothers" (though, mercifully, without using the inane yet irritatingly unforgettable 'earworms' in the game's musical soundtrack). Instead, Kwieciński came up with his own little gestures to represent the limited range of repetitive actions available to the little cartoon character in the game - jumping, vaulting over obstacles, landing on targets and so on - and based on an analysis of a game, assembles them into a fast-moving sequence of events. Extended techniques, foot stamping and noisy page turns are among the components of this not at all serious, highly entertaining piece of musical comedy. Mykietyn's quartet is a product of his recent compositional period in which he builds works on slow, continuous acceleration or deceleration in tempi, as in the Flute Concerto from last month (06S086). Gone are the microtones and polystylism of his earlier pieces; here the harmonic material is simple, in repeating cells, sometimes reduced to a tapping rhythm. It would resemble minimalism were it not for the ebb and flow of planes of material speeding up or slowing down in parallel or contrary motion. In the case of the quartet, unlike the concerto, the piece cycles through a series of episodes with different material, but without the accumulation of harmonic density leading to a 'conventional' musical climax. A bonus DVD contains a kind of mini-documentary (22 minutes) about the ensemble in which the players speak about their artistic credo (in Polish, with English subtitles), illustrated with filmed excerpts from their core repertoire. Lutosławski Quartet. CD + DVD.