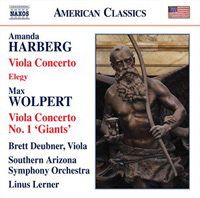 Description: Two extremely approachable neo-romantic viola concerti in popular, crowd-pleasing style and traditional three-movement form. The Harberg is a most attractive work, its first movement exploring themes of flight, with soaring,spiraling, energetic gestural roulades. The tender aria meditates on the fragility of life, and the finale is an affirmative, high energy romp, its syncopated rhythms and modal inflections suggesting a connection to folk music. Her Elegy was written in memory of her piano teacher; gently mourning and resigned in mood. Wolpert's piece inhabits mythic landscapes. The first movement represents C.S. Lewis' concept of 'Father Time' from the Narnia stories; the sleeping giant who will awake at the end of the world. Motifs in this movement are very reminiscent of 'awakening nature' in the first movement of Mahler 3. The second movement, 'The Golden Harp' evokes the 'otherness' of mythical beings' castles in the clouds, with an hypnotic harp ostinato which gives way to the fury of an awakened giant. The finale is a vigorous bacchanal with energetic Balkan rhythms and the modalities of the south and east. Both concerti give the soloist plenty to do (they were written for Deubner), with a lively dialogue between viola and orchestra and cadenzas for solo display. Brett Deubner (viola), Southern Arizona Symphony Orchestra; Linus Lerner.