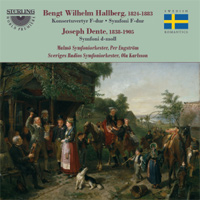 Description: Hallberg, out of the limelight in a small town in the southern province of Skåne, wrote a handful of chamber works but concentrated on sacred choral music and left only a scherzo and another overture in addition to the orchestral works recorded here. The symphony probably dates from the early 1870s and is lyrical rather than heroic with nice pastel coloring from the winds. Dente was a conductor and, as professor of counterpoint, orchestration and composition at the Royal Conservatory, the teacher of many notable Swedish composers (Pterson-Berger and Stenhammar to name just the most famous). His symphony was finished in 1887 and took third place in a competition organized by the Berlin Konzerthaus (Georg Schumann won it and Ferdinand Manns came second). This is a complete contrast to Hallberg’s, in minor key throughout and full of energy and vitality putting it in the line of Scandinavian symphonies leading from Gade through Albert Rubenson (an early admirer of Schumann in Sweden) and Ludvig Norman.