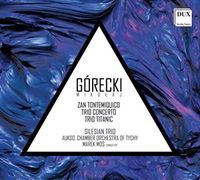 Description: Górecki fils' music has some unmistakable characteristics in common with that of his father - an idiom firmly based in tonality, ready accessibility, - while having its own distinct personality. These three works are very different from one another; in fact they contain considerable diversity within works. Zan Tontemiquico, based on a 15th century Aztec poem, is a neo-Romantic tone poem in three movements. The first establishes a mystical, dreamlike atmosphere in ethereal planes of string texture, chimes and lingering flute melodies; the second is a lively dance with a certain orgiastic primitivism, which suddenly gives way to sonorous, misty textures, as though a door had opened up from the sunlit world to the afterlife; the final section is a lush, glowing meditation, static and ecstatic. The Concerto is a taut arch form in three linked movements. The outer movements are melodic, especially the last, its luscious lyrical phrases punctuated by chiming chords - while the propulsive central section is rhythmically incisive and ostinato-driven. The work is very tonal, though some occasional sonoristic slidings, unpitched clusters and a final opening up of the acoustic space with gentle extended effects, point to a heritage in Polish sonorism. The Trio is a very neo-Romantic view of the disaster of the Titanic, more concerned with the emotions engendered by faded images of the tragedy than the terrifying drama of the events themselves. The opening movement is melancholy and melodic, over the gently rocking accompaniment of a calm sea. Only a 'knocking' fate motif and some foreboding harmonies toward the end suggest that trouble may be approaching. The second movement "Don’t you hear the band playing?" begins lightheartedly, with allusions to popular dances of the time. Soon, though, these are distorted and disturbed by darker, agitated material; the jaunty rhythms try to continue, but clearly something is badly wrong. The fate motif intrudes announces the agitated finale, and underpins most of the movement, finally sounding out like a foghorn to usher in a lamenting, tritone-laden coda. Silesian Trio, AUKSO Chamber Orchestra of Tychy; Marek Mós.