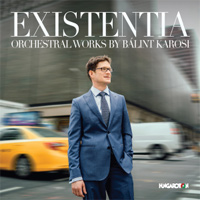 Description: Karosi is an Hungarian composer and organist, who studied in the USA and currently holds an organist's position in New York. As composer he is versatile and wide-ranging, in an eclectic but entirely approachable idiom based firmly in tonality that draws influences from various European sources (pre-eminently his homeland). The organ concerto, which the composer freely admits is intended in the spirit of the Poulenc, is a smartly appealing crowd-pleaser. It begins with luminous, mysterious oscillating cascades of fifths from organ and vibraphone. A melody emerges and is swept aside by a climax from the organ before the opening material returns. The second movement has a more threatening aspect, with heavy percussion interjections; this is followed by an exhilarating French-style Romantic toccata, then a lively scherzo, with organ and xylophone in spirited dispute. A thunderous cadenza for organ pedals and tympani follows, but out of nowhere the opening of the Poulenc concerto erupts onto the scene, and then the warm, glowing opening material ushers in a suitably monumental ending. The timbrally unique triple concerto's first movement's opening is amorphous, seething with as yet undirected energy. The soloists finally pull the material together into a lively, propulsive toccata, full of rippling figuration, modally inflected and punctuated by rough, raucous gestures to offset the elegant perpetual motion mechanism. The slow movement also begins in tonally ambiguous mists, but soon the soloists, joined by others within the ensemble, emerge to play beautiful, exotically tinged melodies, like tellers of ancient tales. Atonal fog enshrouds the scene again, and the music fades into the shadows. The finale is incisively rhythmic, combining neoclassical precision with folk-like ebullience, with a gentle central section, like a serenade. Existentia celebrates the life and work of the Hungarian poet Sándor Weöres (1913-1989), who also inspired Kodály, Ligeti and Eötvös. The work is concomitantly an homage to the culture of Hungary, of which Weöres' poetry is so representative; the orchestra features a prominent cymbalom part, and folk influences abound. The three-movement structure has the sense of a cycle of existence, emerging from and receding into the unknown. The work opens with something of the mysterious, foreboding atmosphere of Bartók's Bluebeard's Castle. Gradually the darkness recedes and a kind of ecstatic epiphany leads to a naive and hopeful ending to the movement. The second movement is propulsively post-minimalist; the energy of life in the broad light of day. The moment of death is sudden and unmistakable; the bustling energy of the world is abruptly stilled and the music returns to the shadows of the work’s opening. The finale seems to depict a blissful afterlife, with the poet having the last word in a folk melody setting of one of the poems that inspired the composer in the final bars.