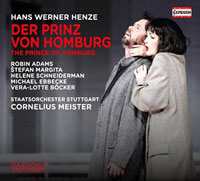 Description: Henze’s opera, with a libretto by Ingeborg Bachmann based on the play by Heinrich von Kleist, adapts the story of a somnambulist prince who, in his dreamlike state disobeys strict Prussian military orders but emerges victorious in battle, then in avoiding a death sentence for insubordination, and finally in love, into a kind of utopian parable in which emotion, individual character and the world of the imagination triumph over the oppression of the systems of the state. The 1958 work, here in its 1991 revision, is readily approachable, ingeniously contrasting a shimmering complex tonality in the sequences featuring the prince with harsher, less tonal material and more angular vocal lines for the 'real' world. Only the latter have any trace of Henze’s earlier dodecaphonic period, and there is nothing of his more experimental style at all (just a little jazz in the setting of one scene). The vocal writing and balance of voices with the exquisitely sensitive orchestration are of course of exemplary quality of technique and expression - to say nothing of the work's urgent dramaturgy, as expected from the pre-eminent European opera composer of the 20th century. No libretto. Robin Adams (baritone), Helene Schneiderman (mezzo), Stefan Margita (tenor), Stuttgart State Orchestra; Cornelius Meister.