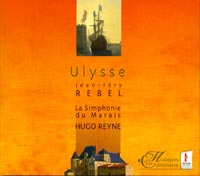 Description: With Accord and its Lully series now unavailable in this country, this surprising new release from a brand-new label helps fill some of the gap. Rebel was known for his innovative orchestral music, especially in dance form and was the first Frenchman to write sonatas but, here, in his only stage work (1703), he returns to the by-then outdated genre of tragédie lyrique. Although much of the orchestration is as striking and new as we would expect, the spectacle audiences wanted to see in this genre was deemed lacking and Ulysse had only ten performances. Unlike Accord's Lully series, this recording was made in studio right after a live performance last July. 2 CDs. French libretto. Guillemette Laurens (mezzo), Stéphanie Révidat (soprano), Bertrand Chuberre (baritone), Bernard Deletré (bass), Le Chœur du Marais, La Simphonie du Marais; Hugo Reyne.