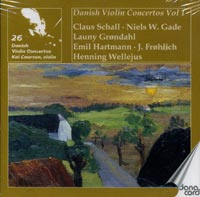 Description: These 10 discs were originally released as a box-set in 1997, just before we took over Records International, and were very quickly out of print. Most are are studio recordings, made 1966-78. Two are private, amateur tapes. Of the 26, 11 are stereo. The recording quality is perfectly acceptable, even for the amateur tapes. A few of these concertos (e.g. the Børresen, Svendsen, Lange-Müller) have since had brand-new recordings. The vast majority have not and maybe never will. The music is mostly melodic and all of it is tonal. Now released in five two-disc sets, you have greater variety of choice if you missed the set the first time around. Kai Laursen (violin).