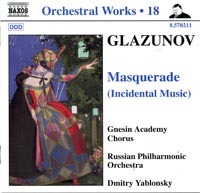 Description: Masquerade might be the rarest Glazunov, remaining only in manuscript to this day. Written in 1912-13, it was used for a 1917 staging of Lermontov's play (why four years later? the notes are silent) and consists of 35 minutes of music in 26 "cues", only five lasting more than two minutes. Much of it is dance music and all of it is supposed to be obscure but you'll swear you know the Valse-Fantasie from Act III. The 2 Pieces of 1886 are a lilting Idylle and a conventionally exotic Rêverie orentale; the Pas de caractère a Hungarian-flavored bonbon of 1899 (neither currently available elsewhere) while the 1900 Intermezzo is a fairly substantial 11-minute chunk of lyrical romanticism which uses a large orchestra. Gnesin Academy Chorus, Russian Philharmonic Orchestra; Dmitry Yablonsky.