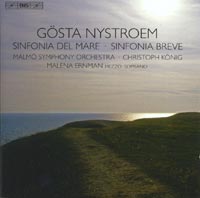 Description: This series (begun in 1996/97 and continued in 2004) finishes up with recordings sitting in the can since 2006 and 2007 (go figure!). The breve was Nystroem's first surviving symphony, dating from 1929-31, and is a taut, concentrated, single-movement work built around the same short motif which appears in many of his most important works. Tension and relaxation mark its 19-minute course with the fast-tempo sections reminiscent of the terse rhythmic qualities one might have heard at that time from Stravinsky, Hindemith or Honegger. del mare is, of course, Nystroem's best-known and most-recorded symphony (although this one here is the only CD version available), in which the pulse of the sea throbs throughout, both in calm swells and in storms. The song set at the work's center was later given a piano accompaniment and published as a stand-alone work in its own right. Swedish-English texts. Malmö Symphony Orchestra; Christoph König.