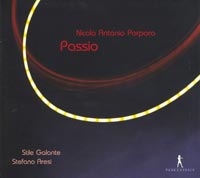 Description: These duets date from 1754 and the notes make an argument that they were intended to showcase every aspect of Porpora's stylistic palette just like the 12 violin sonatas published the same year. Thus, they seem to move on in time from the severe polyphony of the first to the almost Classical quality of the sixth with its concertante organ via French style, coloratura demands and the fifth, which is almost a dramatic scena. The anonymous Miserere represents what would have been generally doable for small village chapels in the Kingdom of Naples. Stile Galante; Stefano Aresi.