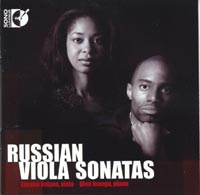 Description: Russian works for viola and piano with the most compelling, because the composer's life was so short and somewhat mysterious, is the four-movement suite by Gaigerova, whose outer movements have that clouds-scudding-over-the-moon, things-creeping-about-in-the-shadows-of-the-crumbling-castle horror-film quality leavened by a somewhat calmer Andantino and a hunting-music-like scherzo. Winkler both studied in Paris and, after 1925, moved to France where he taught at the Conservatory in Besançon; his Pieces have a Gallic quality to them but the large-scale, 33-minute sonata (1902), is grounded in a dark, heavy Russian atmosphere, even considering that the final movement is a set of variations on a Breton folk song (the Celts were dark and gloomy too, of course...). Eliesha Nelson (viola), Glen Inanga (piano).