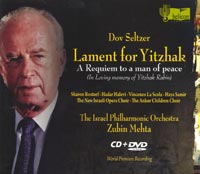 Description: Lament is arranged in sections that follow those of the Catholic Requiem Mass, setting Hebrew prayers that correspond to (and pre-date) the familiar Latin texts, as well as texts by contemporary Israeli poets and other Hebrew and Biblical material. The music is firmly tonal, and between this and the quartet of vocal soloists, large orchestra and disposition of choral forces it brings to mind any number of concert requiems of the past several centuries, from Brahms to Britten or Burgon. The composer's work in the medium of film music is also reflected in the work's vivid imagery and instant accessibility, not to mention a few dramatic special effects - a shofar, crowd noises, the contrasting timbre and style of a folk singer, and most tellingly, recordings of Rabin's voice. Some of the work's most eloquent melodies are tinged with a Jewish folk-flavor, and the piece is sung in Hebrew but for the most part the music represents a more universal condemnation of violence and plea for peace than a locally Israeli occasional piece. Powerful and moving, speaking eloquently to a wide audience, the work is a fitting tribute to its subject. CD + DVD. Hebrew-English texts. Sharon Rostorf (soprano), Hadar Halevi (mezzo), Vincenso La Scola (tenor), Haya Samir (folk singer), Ankor Children's Choir, New Israeli Opera Choir, Israel Philharmonic Orchestra; Zubin Mehta.