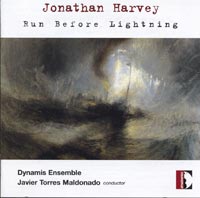 Description: These chamber works, spanning three decades, explore customary territory for the composer; various forms of mysticism (including the arcana of physics) and an expanded timbral palette. The earliest work here, Quantumplation of 1973-75, is the most dogmatically serial, and the least concerned with the sensuousness of sound; using pitch and tempo to suggest subatomic orbits, the work is a complex musical diagram of interacting particles. 10 years later, Flight-Elegy and Nataraja are more linear, less pointillistic, and are linked to oriental philosophies and the inflections of eastern musics, emulated through flexible pitches and extended techniques. Tombeau de Messiaen is the only work here employing electronics - in this case, a pre-recorded microtonal polyphony of alternatively-tuned pianos which interact with the live piano; much of the material is reminiscent of Messiaen's own rhythmic structures ad harmonies, the whole lent an appropriately otherworldly aura by the disorienting microtonal distortion. Messiaen is also invoked, more obliquely, in the repeating motifs and harmonic patterns of the solo piano pieces and the piano part of the evocative Run before Lightning (2004), with its striking imagery. Dynamis Ensemble; Javier Torres Maldonado.