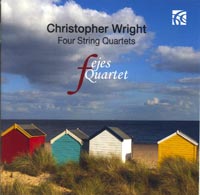 Description: The composer describes his cycle of quartets, a form to which he has returned in each decade of his composing career, as representing a 'compositional journey', charting his changing preoccupations and influences. The First (1978-80) finds Wright experimenting with dodecaphony, in a relatively abrasive harmonic language influenced by Bartók. In all the quartets, a substantial slow movement is the emotional heart of the work, in this case imbued with a pained lyricism. The outer movements are percussive, the first with lyrical episodes, the last interrupted by a sardonic waltz. The Second (1995) is a good deal less atonal, but still inhabits a similarly uneasy world to the First, with the slow movement this time a drawn out lament surrounded by moaning glissando cries. The triumphant fugal finale dispels this mood with rudely energetic counterpoint. The Third is a pivotal work, beginning with brash rhythms and rough harmonies. The second begins in shadowy unease, but a little way in an unexpected volte face occurs, and the music suddenly becomes markedly tonal and consonant, tender lamentation replacing bitter uncertainty. The third movement celebrates this new-found emotional openness in a sprightly dance, maintaining the 'new' tonal language. The Fourth breaks the three-movement mould of the others, with four self-contained movements in traditional form. It also stands apart in its neo-romantic expression of the moods and seasons of a place - Beacon Fell, a hill in Lancashire, England, with outstanding views of the surrounding countryside, an area of great natural beauty. The work continues the new-found tonal language arrived at in the Third Quartet, retaining, and if anything enhancing the expressive urgency of the earlier quartets but without the acerbic edge of the composer's earlier idiom. Feges Quartet.