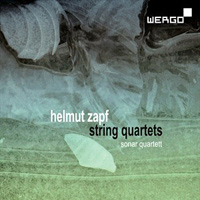 Description: Zapf's quartets, composed over a long span of time, represent stages in confronting the hallowed (and to some, apparently, oppressive) tradition of the string quartet. The first, an early work, retains some vestiges of the discourse between individuals which has always characterised the quartet, though the work's atonality and dense heterophony already suggest that the final destination of the quartet discourse is Babel. The Second treats the ensemble as a single composite instrument, producing blocks of material often in texturally complex unison, and including extended and noise techniques, vocalizations and the rustling of pages. The Third reconnects with the past in a sense, though its gestural polyphony is far from conventional; however, it rediscovers a degree of linear argument that its predecessors seemed to be deliberately finding a way to abandon. The fact that the most recent work bears the title Bagatelles, which implies no formal expectations, suggests a further way to use the familiar ensemble without conforming to tradition; the piece continues the vocabulary of the Third quartet, with sonorous recollections of the Second. Sonar Quartet.