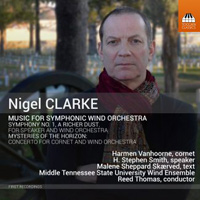 Description: Clarke has a long and distinguished background in British brass band and military band music, so unsurprisingly his excursion into American symphonic wind band repertory in this fifty-minute, four-movement symphony dealing with war and associated inhumanities is a powerful and effective work. The overarching theme of the piece is the brutality of humanity at its worst, expressed through war, terrorism, torture, prejudice and so on. The text, by Malene Skaerved, is assembled from quotations dealing with these subjects from many sources and perspectives. Both the works on this disc are firmly tonal, but the symphony is almost unrelievedly harsh, violent and disturbing in mood, refusing to allow a moment's reprieve from its condemnation of 'man's inhumanity to man'. The first movement consists mostly of a grinding cortège; the second is the real slow movement, a pitch-dark slow march, serving as a backdrop to the narration of a catalogue of statistics of cruelty. The third is a brutal 'scherzo', violent and accusatory, while the text and music diverge in the finale, with the poem attempting to introduce a note of hope, dismissed by the return of the cortège from the first movement. The substantial concerto is more diverse and less harrowing in mood, though based as it is on the surrealist paintings of Magritte it is not without its disturbing, off kilter, nightmarish aspects. The grisly voyeurism of 'The Menaced Assassin' is portrayed as the score to a surreal noir film; the contradictory daytime nightscapes of the 'Dominion of Light' series is playfully sinister; the slow movement is Magritte's vision of war as decay, 'The Flavour of Tears', a ponderous dirge-like processional, with something of the New Orleans funeral about it. The uproarious finale, a vigorous toccata for the soloist, catches fire like Magritte's famous blazing tuba. H. Stephen Smith (narrator), Harmen Vanhoorne (cornet), Middle Tennessee State University Wind Ensemble; Reed Thomas.