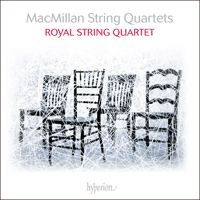 Description: The early Visions of a November Spring already sounds like a work of MacMillan's early mature style, with its references to traditional Scots Gaelic music, an inventive approach to harmony, intense rhythmic vitality, and an exuberant use of compositional resources. A strange prelude, consisting of odd efflorescences around a single pitch is followed by the main part of the work, alternating stylized rustic dance episodes with expressive, lyrical keening. The title of the Second Quartet is taken from the Jewish ritual that marks the beginning of Passover. The work is a vivid interplay of strong contrasts, beginning with a mysterious tremolandi and a section based on a keening, elaborate chant-like melody and a theme written by the composer when he was very young, used as the basis for variations. A brief, violent scherzo interrupts the mood, followed by the heart of the work, the slow movement, a pained lament which abruptly gives way to a vehement, propulsive passage punctuated with violent shrieks. Evanescent, fluttering harmonics announce the arrival of the finale, which maintains a mysterious mood, with quotations from the melodic material of the opening section, before finally subsiding into darkness. The Third Quartet is a substantial three-movement work. The first movement, based on a kind of sonata form structure, combines dense chromaticism with mysterious modally-inflected melodic lines, suggesting a combination of polyphonic chant and archaic folk music. Some extraordinary pitchless 'chatter' in the very highest register punctuates this intense, expressive movement, which is followed by a bizarre scherzo, grotesque and almost cartoonish, featuring what sound like satirical take-offs of certain sound effects beloved of the avant garde. The finale is an unbroken arc of intensely expressive, very slow melody with something Wagnerian in its harmonic progressions as it ascends toward inaudibility. Royal String Quartet.