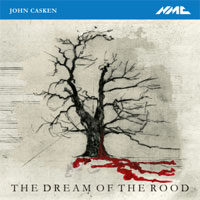 Description: This disc celebrates the Hilliard Ensemble in the large-scale work that Casken wrote for them with large instrumental ensemble. Also included is his work based on Perotin's Viderunt omnes, to which he added instrumental polyphony to Perotin's four-part vocal polyphony, which is unchanged but introduced by an ensemble prologue. The Dream of the Rood is freely adapted by the composer from the strange, surreal Anglo-Saxon retelling of the story of the Crucifixion. The 8th century dream-vision anthropomorphizes the tree that was turned into the Cross as a fellow sufferer along with Christ, who is portrayed as a 'brave young warrior'. Casken's music is shadowy and richly textured, in a sequence of 'Motets', 'Processions' and 'Dreams', with a mysterious, archaic quality redolent of ancient landscapes and forgotten rituals - more tonal than Birtwistle, but with a similar preoccupation with ancient, rough-hewn mythological thinking. Having very little in common with a liturgical Passion, this work nonetheless illuminates in shadowy tones the brutal and disturbing imagery of the story of the ultimate sacrifice. Texts included. The Hilliard Ensemble, Asko|Schönberg Ensemble; Clark Rundell.