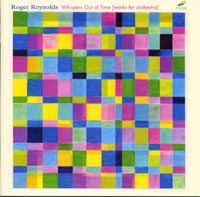 Description: Reynolds shares with Xenakis (with whom his music otherwise shares only passing similarities) the use of advanced technical and mathematical resources to determine the structure of his compositions. But also like Xenakis, there is a mythic dimension to the music's inspiration, and in terms of what the pieces actually sound like, one is aware of a constantly evolving fluid sound-sculpture full of fascinating sonorities and textures, lacking entirely the constructed mechanism of compositions formulated according to certain strict serialist principles, for instance. The two symphonies share an epic, one might say cosmic, quality, while Whispers, inspired by a John Ashbery poem which itself treats the subject of fluid perspective in painting, is on a more personal, intimate scale. Vertigo incorporates spatial elements in the form of electronically treated recorded material, thus expanding the work's sense of dimension.