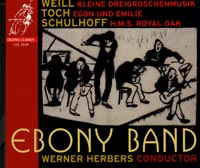 Description: Schulfoff's 36-minute "jazz oratorio" from 1930 was inspired by a contretemps on the ship of the work's title in which several officers got into a fight over whether to allow jazz to be performed by their club salon band. Schuhoff turns it into a class war - proletarian jazzy sailors against upper-class officers - but he isn't really serious. It's just an excuse to compose a diverting series of popular and jazz types of song, strung together by sparing narration. Toch's 12-minute opera satire has a grand diva having a nervous breakdown as the curtain rises because her male co-star will not perform his role. Elena Vink (soprano), Chaim Levano, Daniel Reuss (speakers), Bernard Loonen (tenor), Åsa Olsson (soprano), Capella Amsterdam, Ebony Band; Werner Herbers.