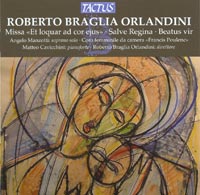 Description: This chamber setting of the five fixed sections of the Mass, with piano accompaniment, appears to be an attempt to preserve the traditional form of polyphonic Latin liturgical music in a form sufficiently economical in resources to form a practical part of actual church services. This is achieved without resorting to the vernacular in language, added texts or non-traditional musical devices. The music is tonal, with some modal inflections and coloristic harmonies, reminiscent of 19th-century religious music such as Rossini's Petite Messe, with glances backward to baroque and mediæval polyphony. The idiomatic piano accompaniment - not a piano arrangement of an organ part - enhances the work's concert-hall appeal, and the work's melodiousness and rhythmic vitality - the composer uses antiphonal, hocketing effects to great advantage in livelier sections - adds to its ready accessibility and appeal. The Salve Regina and Beatus vir are similarly simply eloquent in a spirit of liturgical solemnity. Angelo Manzotti (soprano), "Francis Poulenc" Female Choir, Matteo Cavicchini (piano).