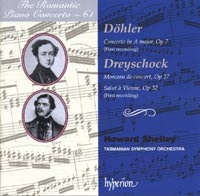 Description: Perhaps the most obscure composer yet in this series, Döhler was born in Naples to a German father and Italian mother, studied with Julius Benedict, Czerny and Simon Sechter and had his piano-playing skills memorably degraded by no less than Heinrich Heine and his compositions in the first edition of Grove by Edward Dannreuther. His 1836 concerto is one of those all-fluff and technical dexterity showcases which make up a reasonably small percentage of the works in this long-running series, fun to listen to, dabs of Chopin (of course), a few nice lyrical effusions amidst the finger-busting fireworks. Dreyshock's 17-minute Morceau (1845) alludes throughout to several Beethoven works and his 11-minute valentine to Vienna is pure ear candy. Tasmanian Symphony Orchestra; Howard Shelley (piano).