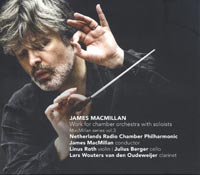 Description: From Ayrshire (2005) consists of a lovely, singing evocation of the gentle side of the Scottish landscape, with more than a little in common with Vaughan Williams' The Lark Ascending, followed by a boisterous reel. The other works here are from the early 1990s, and have a greater degree of the 'angry young man' direct emotional stridency than MacMillan's later works - the kind of thing that made Isabel Gowdie such an explosive introduction to the young composer at the beginning of the decade. Tuireadh (Lament) memorializes the victims of a notorious 1988 oil rig disaster, with keening protests that might also be the desolate cries of seabirds from the soloist, with alternating slow chorale-like material and outbursts of raucous, dissonant anger. Kiss on Wood is a devotional work of unquiet ecstasy, based on chant; the wood in question being that of the Cross. as others is a portrayal of seven notable historical figures based on portraits in London's National Portrait Gallery. Here, MacMillan's social preoccupations are evident in distortions of and accretions around basically tonal material - a microtonal fog here, a satirical pastiche of a courtly dance there - suggesting affectionate (or sometimes, less affectionate) caricatures of the personages in the portraits. Linus Roth (violin), Julius Berger (cello), Lars Wouters van den Oudeweijer (clarinet), Netherlands Radio Chamber Philharmonic; James MacMillan.