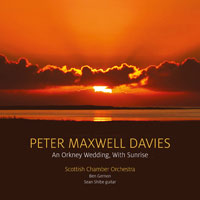 Description: This disc provides two major discographic gains; the superb, late concert overture Ebb of Winter, and Last Door of Light, both among the composer's finest Orkney-inspired orchestral works. Ebb of Winter begins as a vividly descriptive tone poem, surging and turbulent like the tides and currents of the shores of the Orkney islands. From time to time the clouds break in moments of ravishing, luminous stillness. Partway through the work, though, the music suddenly adopts a darker tone, funereal in tread, then a mournful dirge, then a shattering climax. Davies was writing the work just before his first diagnosis of leukæmia and, as he put it, the music 'knew what was about to happen' even though he didn't. The piece transitions back to nature music - the reminiscences of Sibelius that first came to the fore in the Second Symphony never entirely went away - before the end, and the final few bars suggest a glorious sunrise after the storm. Last Door of Light takes its title from a poem by George Mackay Brown. Similar in scale and scope to Ebb of Winter, the work also evokes the Orkney landscape and the unpredictable moods of the sea, now tempestuous, now calm, in the composer's late, tonality-based style. It uses an original folk-like theme that Davies composed decades erlier, and explores themes of landscape, the impermanence of ruined settlements on the islands, soon to be swallowed by the sea, and mortality. The enigmatic little Hill Runes are summed up by a quotation from George Mackay Brown: "I carved these runes on the cold air of the north". The composer associates them with mysterious Viking runes found on Orkney, and deliberately avoided any Spanish associations of the guitar, opting for a chill clarity of line. The guitar version of an atmospheric interlude from The Yellow Cake Review (originally for piano; very approachable), and Davies' most performed orchestral work, riotous, colorful, joyous, culminating in splendor, round out this appealing disc. Scottish Chamber Orchestra; Ben Gernon.