KRSYSZTOF OLCZAK (b.1956): Accordion Concerto, ANDRZEJ DZIADEK (b.1957): Stabat Mater, RADOSLAW ŁUCZKOWSKI (b.1955): Concertino for Piano and Strings, TADEUSZ DIXA (b.1983): Horn Concerto, MAREK CZERNIEWICZ (b.1974): To the One Nestled Among Violins for 4 Violins and String Orchestra. 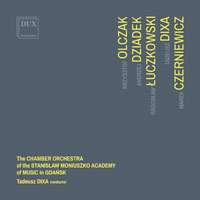 Description: Five composers united more by geographical association with the city of Gdansk than any obvious stylistic similarities, though all write accessible, tonality-based music that falls into the neo-romantic to mainstream, modernism-avoiding 20th century field. Olczak is an accordionist-composer, and his vigorous concerto, somewhat Bartókian in language, is full of skilled, virtuosic solo writing. Rhythmic incisiveness and bold, exuberant colors abound throughout. The work's dramatic arc takes an unexpectedly dark turn in its later stages, the soloist nervously illuminating a towering, granitic chorale, suggesting some hidden narrative. Dziadek's setting of the Stabat Mater is prayerful, melodious and rich in harmony. Admirers of Łukaszewski's religious vocal music will find much to enjoy here. Łuczkowski's delicious, thoroughly tonal Concertino is instantly appealing. A vivacious first movement is followed by a wistfully lyrical slow movement and an emphatically decisive finale. Shostakovich's piano concerti, along with Rachmaninov and Prokofiev, are very apparently the composer's models. The Horn Concerto by Dixa is full-bloodedly Romantic. The first movement is poetic and lyrical; the second, dramatic and purposeful, with a strong sense of narrative. Czerniewicz' piece, the title of which seems appropriately rendered as To the One Nestled Among Violins is a tribute to one Prof. Jerzy Hazuka, commissioned by his violin students. A quartet of violins act as 'soloist' in a serene, warm composition, deliberately traditional and drawing on the slow movements of romantic violin concerti. Chamber Orchestra of the Stanislaw Moniuszko Academy of Music in Gdansk; Tadeusz Dixa.