THOMAS AGERFELDT OLESEN (b.1969): The Picture of Dorian Gray. 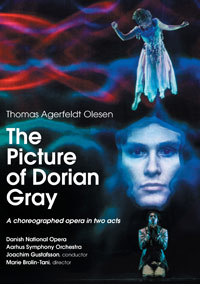 Description: Olesen's opera-ballet, after Wilde, is an effective retelling of the story, faithful to its outline and major events, but with a substantial change of emphasis in the second half of the story. Much Wildean detail is omitted, including much of the wit and social observation, and the work becomes an extended elaboration of the themes of fear of decay and death implicit in the original. The work was conceived with offstage singers and onstage dancers representing the characters; this ingenious dramatic device works well, but as the detailed and intricate interpretive dance is integral to the portrayal of the characters' actions and emotions, the work has to be experienced in its full audio-visual entirety. Olesen's music is a curious but effective collage of disparate styles; much of the narrative is in a style directly derived from Germanic late romanticism, above all, and very overtly, Richard Strauss; moments of high drama bring in flashes of a more dissonant vocabulary. But other scenes, like those with the doomed actress Sybil Vane, are in Broadway style, and one episode sounded for all the world as though the composer were auditioning to write the big hit from the next Disney animated epic. Dorian's years of debauchery are represented by an onstage orgy accompanied by decadent 'roaring twenties' jazz age music. An unconventional interpretation on many levels, but one that works on its own terms. Children of the Ballet Academy of Aarhus, Danish National Opera Chorus, Aarhus Symphony Orchestra; Joachim Gustafsson. Stereo 2.0. NTSC region 0. 107 min.