RALPH VAUGHAN WILLIAMS (1872-1958): Prelude from 49th Parallel, 3 Portraits frim the England of Elizabeth, Suites from the Films The Story of a Flemish Farm and Coastal Command. 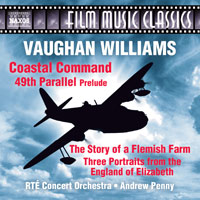 Description: Film music became a significant part of VW’s output in the latter decades of a long and distinguished career. He viewed film scores as more than just ephemera, seeking to "intensify" the spirit of the whole" in wartime productions such as the defiantly anti-Nazi 49th Parallel of 1941 and Coastal Command (1942), in which the graceful romance of sea-planes sends the spirits soaring. The haunting and evocative atmosphere of Flemish Farm (1943) contrasts with the Portraits of 1955 that evoke the first Elizabethan age and announce the springtime of the second. RTÉ Concert Orchestra; Andrew Penny. Original 1995 Marco Polo release.