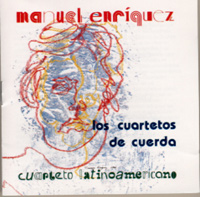 Description: Like the orchestral works offered above, Enriquez' quartets span all phases of his career, beginning with the attractive and relatively conventional, largely tonal First of 1957. An energetic, abrupt first movement is followed by a lyrical, lamenting second and a lively, dancing finale. The Second and Third quartets are examples of his experimental period, employing sonoristic blocks of sound, aleatoric techniques and extended playing techniques, and a complete absence of tonality. By the Fourth he was beginning to return to a less aggressively modern idiom, though this is as much timbre-based as it is harmonically or melodically oriented music. The Fifth marks a partial return to the dissonant brand of nationalistic post-romanticism in which melody is an important feature, that characterized the composer's early works. Cuarteto Latinoamericano. Private label. No catalogue number.