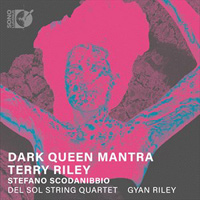 Description: Dark Queen Mantra is a recent work in the venerable minimalist's output. Since In C, Riley's enthusiasms and influences have grown, and you can hear jazz, Indian music and a kind of Romanticism throughout the three movements of this work, alongside the wide-eyed, blissed-out naivété that has never deserted him. The first movement is very Spanish-influenced; the title is the name of a hotel in Spain, the music colorful, the guitar's lively patterning flamenco-derived. The second movement begins lyrically and moodily evoking the atmosphere of Goya's paintings, but soon takes flight in fluttering figuration, while the third, after a folky introduction, becomes a more conventional work of minimalistic shifting patterns, the harmonies and guitar timbre contributing an almost rock'n'roll groove. Mythic Birds, from 1983, borrows from rāga and tabla rhythms, with a slow jazz-tinged introduction and epilogue. Scodanibbio's Mas Lugares is a kind of suite of Monteverdi madrigals transcribed into the composer's rich, unearthly soundworld of stringed instrument color. Among the reflected, refracted and splintered phrases the original Monteverdi madrigals are clearly recognisable, transformed into a stained-glass mirage of glistening flageolet tones. Two of the movements bring the originals into closer focus, as it were; two shift perspective to a viewpoint from which the fragments form more abstract patterns, and the final section shifts focus between the two. Gyan Riley (guitar), Del Sol String Quartet).