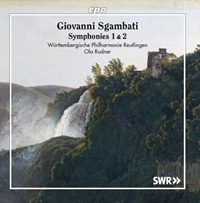 Description: Almost six years ago, Naxos gave the First a new recording, a five-movement work (it adds a Serenata between scherzo and finale) which we described as “everything musicologists have said it was: Italianate melody and Germanic compositional rigor, i.e. plenty of attractive tunes but no wallowing”. Now we have the Second, finished in 1884 but never performed until Sgambati’s memorial service in January of 1915 and then never published. A new score was made from the handwritten orchestral parts (the full score was lost sometime in the 20th century) and the modern premiere given in Feb. 2014 by the orchestra and conductor who made the Naxos recording of the First. It’s much in the mold of its predecessor but the galumphing scherzo seems to add a touch of satire (of country dances) to the recipe also. Württembergische Philharmonie Reutlingen; Ola Rudner.