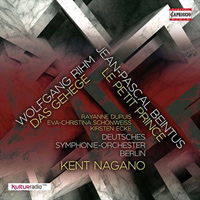 Description: Kent Nagano approached Rihm for a theatrical work to precede Richard Strauss' "Salome" - and the result brought out the composer's inner Expressionist at its very finest. Rihm immediately suggested the last act of Botho Strauß' allegorical play "Schlusschor" ("Final Chorus") as "the only" possible text for his extended monodrama. Strauß' play concerns the complex ramifications of the re-unification of Germany, and the third act takes place immediately after the fall of the Berlin Wall, an event for which the choral finale of Beethoven's 9th became a symbol, hence the play's title. The final act crosses from realism and social commentary to symbolism; a woman, a Prussian aristocrat, leaves a café after the news of the wall coming down has been received. She goes to the zoo, where she liberates a golden eagle, heraldic symbol of Germany, from its enclosure and attempts to entice and cajole it into an erotic union. Denied this, she berates the bird for having become domesticated in captivity, seizes, kills and dismembers (and possibly devours) it. Rihm responds to this textbook example of Expressionist symbolism with music that draws, almost inevitably, on Schönberg's Erwartung - while in no sense derivative of that masterpiece, Rihm's exploration of the extremes of passion and implied violence clearly has much in common with it. And also with the work it was written to accompany; there are clear links to Strauss, and also to Mahler, Berg, Weill, Busoni, and in veiled references, to Beethoven's 9th. This extended palette is necessary because of the complexity of the sociological background to the text, and Rihm handles the overwhelmingly heady and intoxicatingly potent stylistic brew with masterful aplomb. Beintus' suite after Saint-Exupéry's whimsical philosophical tale is, perhaps mercifully, much lighter fare (had the record company opted for the obvious coupling for Das Gehege - Erwartung itself - it might justly be accused of presenting a danger to public health). Its ten short movements illustrate key meetings and characters in the book, in a tonal, neo-romantic idiom that matches the novella's combination of quaintness and emotional depth, like the author's exquisite watercolour illustrations. Rayanne Dupius (soprano), Eva-Christina Schönweiss (violin), Kirsten Ecke (harp), Deutsches Symphonie-Orchester Berlin; Kent Nagano.