MAGNUS LINDBERG (b.1958): Tempus fugit for Orchestra, Violin Concerto No. 2. 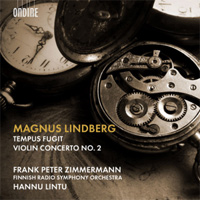 Description: Tempus fugit joins works like Sculpture, Kraft, EXPO, Feria, Al largo and I (03R073, 06O083, 04M088 et al) in the series of large-scale orchestral works with a powerful sense of forward momentum and masterful use of often huge orchestral forces, composed in Lindberg's consistent but evolving 'meta-tonal' language which he has striven to codify for years in order to arrive at a vocabulary in which harmonic progressions have the inevitability and directionality of tonal key relationships. The 'time' of the title has multiple meanings; the piece was commissioned for the centenary of Finnish independence, and it implies both the rapid progress of history and 'time in flight', leaving traces after it moves on. But in an interview from around the time of the premiere, Lindberg hints at some more personal connotations as well. He speaks of the young Finnish composers of his generation seeking to distance themselves from Sibelian nationalism, but the separation was clearly short-lived and incomplete; not for the first time in Lindberg's output the piece resonates with an abundance of Sibelian gesture, lending support to Lindberg's compatriot Leif Segerstam's contention that Sibelius was the inescapable fount of all modern music, Finnish or otherwise. In acknowledgement of the sphericity of his personal timescale, Lindberg also returned to a computer-assisted cataloguing of chordal relationships from early in his career to provide an organised 'pool' of harmonic material. The piece has an overall feel of solemn but exultant celebration, centred on a 'slow movement' of great magnificence and culminating in a final, chorale-like grand summation, which inevitably brings back material from the kinetic early parts of the piece, confirming the cyclicity of time and its musical depiction. The expansive and impressive concerto was written for the present soloist. The composer consciously avoided frivolous showmanship, though real solo virtuosity is present in abundance, preferring an epic, cogent argument of quasi-symphonic scope. The work is sumptuously orchestrated and is among Lindberg's most lusciously neo-romantic scores, cast in traditional three-movement form played without breaks, with an extended cadenza in the 2nd movement. Frank Peter Zimmermann (violin), Finnish Radio Symphony Orchestra; Hannu Lintu.