Russian piano at the turn of the 20th century 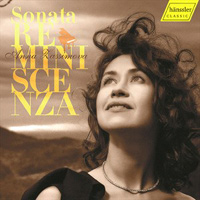 Description: This ingeniously programmed recital is imbued throughout with nostalgia for the vanished world of Russian Romanticism, swept aside by the tumultuous events of the 20th century but leaving a rich legacy of superb fin-de-ciècle music bracketing the turn of the twentieth century, much of it largely forgotten these days. The achingly lovely, sorrowful Kalinnikov Elegie is a case in point; reminiscent of Tchaikovsky's The Seasons and the spirit of Chopin, this and many similar works were rejected by the harsh ideals and realities of art in Soviet times, but this says nothing about their intrinsic quality, which is of a very high order. The exquisitely crafted preludes by Lyadov inhabit a similar world, genteel but with an undercurrent of restrained passion, as do the Morceaux by his one-time student Catoire, which in their understated way demonstrate the composer’s total understanding of the lyrical and expressive qualities of the piano. Peter Catoire was Georgy's son; his little Méditation, while unquestionably conservative for its year of composition (1943), could easily be taken for an album-leaf by the elder Catoire. Shades of Tchaikovsky again in Rebikov's enchanting Waltz, a piano solo number extracted from the composer's chamber opera based on Hans Christian Andersen's 'The Little Match Girl', in which it is an important thematic element. Steps along a road not taken into the 20th century are intriguingly suggested by quarter-tone pioneer Wyschnegradsky's rare essay in which the composer restricted himself to the chromatic scale. Despite the acknowledged influence of late Scriabin on composers like Roslavets, Protopopov, Mosolov et al., Wyschnegradsky's Etude is perhaps one of the clearest extant examples of where the evolution of Scriabin's last period, rather than the resonance of what he had already done, might have gone. The work abounds in the textured interplay of a pianistically inventive counterpoint of sound 'objects' which imply a clear directionality of argument even in the absence of conventional tonal relationships, requiring an exceptional degree of textural definition, coloristic sensitivity and rhythmic precision from the pianist - which are amply in evidence here. The dramatic, incandescent Scriabin and melancholy, passionate Medtner (the latter in particular receiving one of the finest available recorded performances in a far from sparse field) make perfect sense in the context of the programme, to round out this most desirable disc. Anna Zassimova (piano).