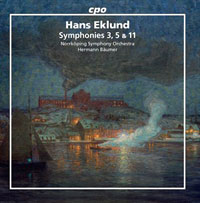 Description: Another first-rate Scandinavian symphonist whose rediscovery is well overdue. Eklund was born in Sandviken, a small industrial town, and was only able to contemplate a career in music after he moved to Stockholm to study with Lars-Erik Larsson . Some of the grimness and grinding industrial mechanistic force of the background to his childhood seems to have become ingrained in his music, alongside a recognition of the gritty realities of working-class life and a generally pessimistic view of the world (he was given to cheery sentiments like “My despair for the future is infinite”) both of which he had in common with Pettersson. (In fact he was one of the few composers whose company Pettersson could tolerate, apparently.) His symphonies are almost unrelievedly dark, granitic and unyielding, less despairing and tragic than furiously rejecting of war, death, and destruction by humankind, not infrequently in a brutal, percussion-heavy, almost hectoring idiom, though resolutely tonal. This will recommend them unreservedly to admirers of Pettersson, and rightly so, though the two composers actually sound very different most of the time. These symphonies are compact, highly concentrated three-movement structures in untraditional layout, and all three bear unhelpful and misleading titles, for example the tragically protesting 11th, which at half an hour is actually one of the composer’s longest. It was written in memory of Eklund's beloved teacher Lars-Erik Larsson, and is nothing like the small, lightweight work suggested by the title "piccola". The opening theme, an angular arching cry of protest, occurs in many guises throughout the symphony with obsessive insistence, and dominates the first movement. It is developed through a series of dramatic episodes, tense and subject to eruptive climaxes. The second movement begins as a battering, mechanistic scherzo; then a lonely bugle call ushers in a darkly, sonorously pulsating episode, one of the few instances of Eklund sounding much like Pettersson, which then alternates with the brutal scherzo in various manifestations for the rest of the movement. The huge, ponderous adagio-finale, surging forward in dark waves of utter despair, begins with a slow statement of the symphony’s opening theme. A rich, warm presentation of the Dies irae soon follows; that this sounds consoling compared to the music that surrounds it is telling. Finally, though, the movement achieves a kind of resigned repose, though a final furious spasm renders it illusory. Sinfonia rustica is likewise nothing like the title implies. Originally titled "Raukar", which refers to the towering sea-hewn stone pillars off the Swedish coast, the symphony is built of towering blocks of sound, beginning with an abrupt, eruptive thematic gesture with the unusual but descriptive marking "Adagio impetuoso", which recurs throughout the first movement. When it returns in a central allegro episode, the battering rhythmic violence suggests something more man-made than natural. Between these climaxes a brooding, lonely, desolate seascape fails to offer any comfort or repose. In the short second movement a folk tune is unsettlingly treated as it might sound were it a component of Shostakovich’s 4th Symphony, whereas the first part of the finale evokes the 5th. The rauk-motif re-emerges with volcanic violence, and the symphony ends as darkness falls over a long horizon stabbed by the shadowy figures of the rauks. The title of the Fifth Symphony means "Pictures" but this tells you nothing about the music until you find out that the paintings depicted are "Death and the Maiden", "War Dance", and "Destruction". The first movement is based on the painting by Sven Richard Bergh (1858-1919) in his French-influenced early style, depicting a demure young lady who has apparently stepped out of an Impressionist scene with her bouquet of flowers, unaware of a macabre, skeletal grim reaper into whose embrace she is about to fall. Eklund makes of this sinister scene a more universal tragedy, writ large in dramatic gestures as though expanding the scope of the painting to symbolise an innocent world falling into the clutches of war. The second movement is appropriately warlike, with military percussion and fanfares, and even its dancelike episodes are mostly heavy, stamping, and heavily percussive. Both Bengt Nordquist (1917– 2012) and Gunnar Jonsson (1917–2007) were abstract painters who were friends of the composer, and the latter's "Destruction" inspired the dynamic, tumultuous battle scene that forms the symphony’s driven, relentlessly energetic finale, and its desolate, post-apocalyptic coda. Norrköping Symphony Orchestra; Hermann Bäumer.