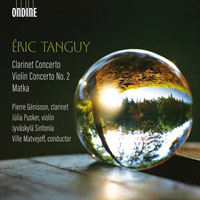 Description: Both concertos, like the cello concertos we offered previously (02J103) are large-scale virtuoso vehicles that largely conform to the conventions of the Romantic concerto. The composer’s idiom is very distinctive; extensive use of modality and rich harmony lends the music a sense of free-floating tonality that avoids extreme dissonance entirely and presents its dramatic arguments and confrontations without the strenuous conflict of opposites implied by tonal relationships, or the instability of chromaticism applied to key-based tonality. The soloists are virtually omnipresent throughout. Both opening movements are marked "Intense"; that of the Clarinet Concerto is choleric, dramatic and loquaciously argumentative. The slow movement is imbued with a sense of sweet, gentle melancholy with ripples and undercurrents of agitation; the clarinet spins a thread of plangent lyricism throughout the movement. The finale is lively and airborne; exuberant orchestral fanfares set the scene for the soloist's genial gambolling, with some jazzy swooping thrown in for good measure. An exuberant cadenza introduces the energetic final section. The searing lyrical drama of the first movement of the 2nd Violin Concerto (1996/2004) with its underpinning of obsessively pounding ostinati in the orchestra’s low registers is, if anything, even more intense than that of the Clarinet Concerto, because of its ferocious concentration and avoidance of fleeting melodramatic gestures. The slow movement is gentle, nocturnal, and mysterious, though retaining a slow, obsessive pulse which relates its restrained tension to the more vehement expression of the opening movement. The composer’s modal language is ideally suited to the music's ambiguous, unsettled harmony. The driven, virtuosic finale is a tour de force for soloist and orchestra alike. The movement is a kind of rondo, with slow episodes that offer a reminiscence of the nocturnal atmosphere of the slow movement, and a large cadenza that alternates reflection and formidable virtuosity, before a final mysterious meditation and a scamper to the finish. Matka, the title implying both a physical and an inner journey, is a tribute to Sibelius, written for the 150th anniversary of his birth. A substantial tone poem, the piece has only fleeting references to identifiably Sibelian motifs or gestures (a couple are unmistakable, though), but as concentrated nature music of ruggedness, stillness, and mystery in a freely tonal (modal) language, it is a fitting memorial to the Finnish master.