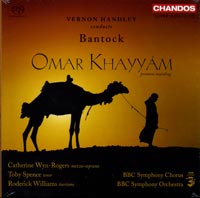 Description: Bantock conceived and sometimes completed many mammoth compositions and this is the largest yet to be recorded. Premiered in 1910 and lasting, in this performance, just eight minutes under three hours, this is a setting of some of Edward Fitzgerald's translations of the Persian poet's Rubaiyat. Bantock created the characters of The Poet, The Beloved and The Philosopher to deal with three main strands of Khayyam's thought: life, love and philosophical speculations. Collectors will know how vivid and colorful Bantock is in his orchestration from the six CDs of orchestral tone poems and symphonies which Hyperion has just reissued at mid-price in a box (see below). Everything you could ask for and more is delivered in this phantasmagoria of Victorian exoticism. A 68-page book helpfully lists the main motifs (there are 25 of them!) and leads you through the work's three parts. You'll hopefully have the same sense of amazement and delight which the notes tell us were the reaction of the soloists, chorus and orchestra while making this recording. 3 CDs. Texts included. Catherine Wyn-Rogers (mezzo), Toby Spence (tenor), Roderick Williams (baritone), BBC Symphony Chorus and Orchestra; Vernon Handley.