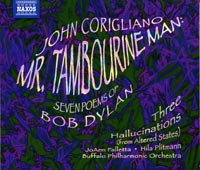 Description: Inspired by the poetry of Bob Dylan's lyrics with their trademark blend of the earthy and oblique, but not having heard the folk-rock singer's own music, Corigliano composed his song-cycle in his own style. He deliberately avoided 'folk' allusions apart from his insistence that the singer be amplified through a close 'vocal mic', thus allowing a close-up intimacy befitting the personal nature and original style of the lyrics. The result is sophisticated concert-hall Americana, more than a little reminiscent of Bernstein or Bolcom. The three scenes from Ken Russell's movie 'Altered States' accompanied surreal hallucination imagery, and are appropriately menacing and presented in rich, over-lit orchestral colors and textures, the second incorporating a distorted hymn-tune floating in and out of a dissonant haze. Texts included. Hila Plitmann (soprano), Buffalo Philharmonic Orchestra; JoAnn Faletta.