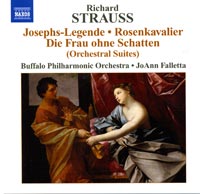 Description: In no need of later Peter Breiners, Strauss made his own suites of music from his less popular and less performed operas and ballets. Calling one a "fragment" and the other a "fantasy", he put together 24 minutes of music from his full-length 1914 ballet on Joseph and Potiphar's wife in 1947 only one year after doing the same for 21 minutes of the 1919 opera whose dark morality play was light years away from the light and urbane Rosenkavalier. Buffalo Philharmonic Orchestra; JoAnn Falletta.