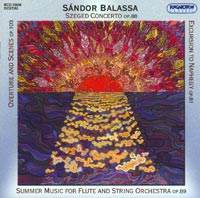 Description: The small core of collectors who realize that they have a real prize in this Hungarian composer will be delighted to find 77 minutes of brand-new music from him in this new release - not being released in the U.S. Practically devoid of any avant-garde influences in his late maturity, these four works from 2003-04 and 2008 have plenty of Balassa's main stylistic trait: the melodic, tonal and rhythmic patterns of Hungarian folk music without ever employing actual folk song. The Overture and Scenes is a particularly felicitous work, in baroque suite form with an extended overture and six subsequent movements, two particularly Hungarian in flavor. There is more of the latter in the Szeged Concerto, while the aptly-named Summer Music could almost be an English pastoral piece while the shortest piece, the Excursion, is another serenade-like work for a student orchestra with a colorful, folk-like finale. Béla Drahos (flute), Budapest Strings; Richard Weninger, Béla Drahos.