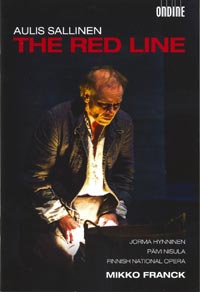 Description: The red line of the title is the mark of a vote in the 1907 parliamentary election in Finland, which promised reforms for the poor, largely unrealized. Sallinen's libretto is adapted from the novel by Ilmari Kianto, masterfully changing the perspective from a detached overview of the events to a sympathetic viewpoint from within the ranks of the common people. Indeed, this is one of the great strengths of the opera; the vividly drawn, three-dimensional characters, portrayed in their hope, despair and confusion in text and music. The score is quintessential Sallinen, with surging, Sibelian climaxes at key moments in the drama, as dark and elemental as the landscape of Tapiola or the 4th Symphony, precisely the backdrop against which the drama is played out. The icy scurryings,glacial suspended textures and truculent ostinati of Sallinen's own 4th Symphony - composed a year after the opera - provide a reference point from the composer's own symphonic output, while Sallinen's other familiar stylistic antecedents, Shostakovich and Bartók, are also evident as part of the fabric of the composer's unmistakable style. The grimness and tragedy of the work's overall tone is skillfully relieved by occasional deft, sly humorous touches, as when the Socialist agitator preaches 'liberty, equality, fraternity' and the music veers close to quoting the Marseillaise, but doesn't - quite. What distinguishes Sallinen among 20th-century opera composers is his gift for unusually memorable melody, whether the faux folksong of the glib peddler Simana, or the tortured monologue of the family matriarch, Riika, as the failure of the promised reform to save her family becomes terribly evident. The staging effective blends literal imagery and costumes with stylized sets, open and undistracting, with subtle, clever use of back-projection. An illustrative 'chorus' of dancers highlights the action with stylized gestures in crowd scenes. The production is filmed uncomplicatedly, apart from a mercifully brief, unnecessary video special effect delineating a dream sequence, with multiple camera angles highlighting the action in closeup alternating with wide shots of the geometrically striking stage layout. Extras are informal, anecdotal, chattily informative interviews with composer, director, conductor and Hynninen, who sings the rôle of Topi in this 2008 Finnish National Opera production as he did in the world premiere 30 years earlier.