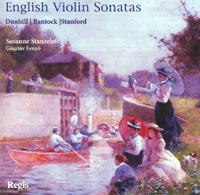 Description: This came out 15 years ago on a label which soon died, so it's likely that many of you never saw it. From the July 1996 review in "Gramophone": "...the fluent and engaging sonata of Dunhill. As befits the work of a composition pupil of Stanford at the RCM, it is an impeccably crafted, highly mellifluous affair, featuring a central Adagio lamentoso of no mean depth and grave nobility (the piece was written during the First World War). Stanford's own first sonata (an early effort dating from around 1880) also makes very agreeable listening. Again, the writing is always skilful and melodious and, again, it's the passionate Allegretto moderato slow movement which stands out. The last of Bantock's three violin sonatas (completed in 1940) is a lyrically serene, touchingly unaffected outpouring, whose spare-textured, intimate manner and clean-limbed concision will surprise those who know this figure only through his vast, bewitchingly colourful orchestral canvases." Suzanne Stanzeleit (violin), Gusztáv Fenyò (piano). Original 1996 United release.