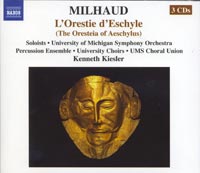 Description: First, this is not an operatic trilogy: Agamemnon is 11 minutes of incidental music for a stage play and Choéphores likewise, only 35 minutes in length. These date from 1913 and 1915-16 and Choéphores is far the more advanced as Milhaud already starts using rhythmic speech and a supplement of 15 percussionists. Euménides (1917-23) was produced on stage (it's 95 min. in length) and uses saxophone and saxhorn quartets in addition to the orchestra, makes much use of polytonality, producing tightly-woven and dense music which one listening will not easily unlock, although the primitive quality of the music and its rhythmic complexity is used to depict sweetness as well as violence. William Bolcom, who had Milhaud play him a recording of L'Orestie while he was studying with him in the late 1950s, was the major force behind this remarkable project. 3 CDs. Libretto and translation available on-line. Lori Phillips, Brenda Rae (sopranos), Dan Kempson, Sidney Outlaw (baritones), Tamara Mumford (mezzo), University of Michigan Choral Union, Chamber Choir, University Choir, Orpheus Singers, Percussion Ensemble and Symphony Orchestra; Kenneth Kiesler.