RALPH VAUGHAN WILLIAMS (1872-1958): A Road All Paved with Stars - A Symphonic Rhapsody from the Opera “The Poisoned Kiss” (arr. Adrian Williams [b.1956]), Stricken Peninsula - An Italian Rhapsody (reconstr. Philip Lane [b.1950]), 3 Nocturnes for Baritone and Orchestra (I and III orch. Anthony Payne [b.1936]), 4 Last Songs for Mezzo-Soprano and Orchestra (orch. Payne). World Premiere Recordings. 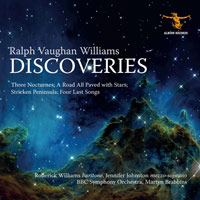 Description: The Nocturnes of 1908 reflect VW’s brief period of study of orchestration with Ravel (I and III existed in short score and II was fully orchestrated by the composer) and look forward to the sound world of the London and Pastoral symphonies. Next comes a 27-minute “opera-without-words” suite of delicious music from the 1936 opera whose music is close to light opera generally but whose climax has some of the most passionate and lyrical music VW ever wrote. The Four Last Songs were published under that title in 1960 but were written between 1954 and 1958; Payne models his orchestration on the composer’s Songs of Travel. Texts included. Roderick Williams (baritone), Jennifer Johnston (mezzo), BBC Symphony Orchestra; Martyn Brabbins.