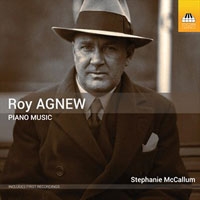 Description: A fine musician who was one of the first Australian composers to achieve widespread recognition. He was a pianist, and by far the greater part of his output is for his own instrument; he was on good terms with many pianists who contributed to the Australian concert scene in the early 20th century, one of whom was Moiseiwitsch, who played some of Agnew's early works. McCallum's notes characterize Agnew's piano music as "persuasive pieces which show the work of a natural, highly creative pianist, comfortable with his instrument and able to craft cogent scores in the idioms of his day ...", which sums it up nicely. His own idiom was conservative, and leant heavily on 'the idioms of his day' which included British modal/chromatic Romanticism (Bax, Delius), Liszt, French Impressionism, and especially Scriabin, but the pieces are original, highly accomplished, and most enjoyable. Scriabin was an especial enthusiasm of Agnew's; the 1929 Sonata is very clearly an exercise in writing a piece in the style of Scriabin's 9th. Being close enough to the original that this is apparent, but less compelling or thematically memorable, may explain why it remained unpublished (although in its own right it is a fine piece, texturally and harmonically interesting). Both Drifting Mists and Etude explore Scriabin's harmonic freedoms and moods much more successfully, and the Preludes are certainly an homage to the earlier Scriabin, also an influence on the Poems. The Sonata Poème is a substantial work; its title and some of the harmonic language suggests an affinity with Scriabin, but procedurally - and dramatically once it gets going - it has far more in common with the Liszt sonata, which is confirmed by a direct homage at the end. The early Australian Forest Pieces suggest that the composer was acquainted with MacDowell's Idylls and Sketches, while “The Falling Snow” from the Three Lyrics seems to be waiting for some Debussian footsteps to be planted in it, and the Rhapsody, The Happy Lad, Elf Dance and May Day are flavored by the modal English folk idiom that fellow Australian Percy Grainger loved. A Dance Impression is a flirtation (at a respectable distance) with jazz, which was very much in the air and capturing 'classical' composers' attention in 1927. Stephanie McCallum (piano).