RICHARD BLACKFORD (b.1954): Kalon for String Quartet and Orchestra. 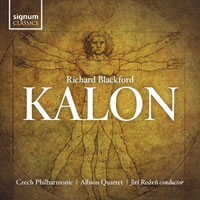 Description: This 25-minute suite of three movements is, first and foremost, highly approachable and essentially Romantic in concept, similar to the previous works by Blackford that we've offered (12Q065, 05S064 etc.). It is also technically interesting and original, as it was written when Blackford was undertaking Ph.D studies in the use of instrumental groups playing material in contrasting tempi within a composition. He strove to keep the material played harmonically restricted, so as to permit an ebb and flow of consonance and dissonance, and used computer modeling to determine what level of complexity was readily decipherable by the ear. This is all of secondary importance, but it happens to lead to an unusual way of achieving diversity and interest within a tonally stable context, energized by rhythmic complexity. The first movement is a lively exposition of the kind of jubilant, buoyant textures available by this method. The material is based on a recording made by the composer of a three-stringed Cretan lyra, transcribed for the quartet, and thus sounds modal and very southern-European in inflection. The central slow movement is the heart of the piece; it draws inspiration from the Cavatina of Beethoven’s Op.130, chosen as a cultural ambassador to the galaxy aboard the Voyager spacecraft, and also from the heartbreaking circumstances of Jewish string quartets in the Nazi death camps, forced to play the great works of the repertoire while surrounded by unspeakable horror. In this movement the quartet and orchestra are constantly at odds, never synchronized and thus leading to some clashing conflicts. The final movement, 'Stile concitato', uses that strenuous Baroque style of rapid repeated notes to form music that phases in and out of synchronization between the two groups, whose material is barred independently, creating distinct, parallel layers that bring the work to an exhilarating conclusion. Albion Quartet, Czech Philharmonic Orchestra; Jirí Rožeñ.